Strollers are serious business around here. People take choosing the right stroller as seriously as choosing a car, and brands like Uppababy, Stokke, and Bob reign supreme. I looked at those brands, and I may look at them again in the future, but back when I was choosing a stroller, I wanted something a bit more budget friendly. After all, after spending so much setting up Sara's nursury with fine furniture, clothes, accessories, and even paint, I didn't want to spend a lot on a stroller too.

I knew I wanted a jogger travel system, which is a stroller that comes with an infant carrier. Even though I don't jog, I do like to go on brisk walks, and I was planning on joining an exercise group, so a jogger would be best. I began searching Amazon, and I found the Baby Trend Expedition Travel System. At right around $200, the price was great, and it had great reviews too, so I ordered one in Tropic, which is a bright teal color, my favorite!

It was delivered quickly, and was easy to put together. The infant carrier came with a base for the car, which was also easy to install. The stroller folds down easily, and fits nicely in the back of both my suv and in the trunk of my small car.

Getting Sara in and out of the seat is really simple, as the straps easily adjust, and she loves it too!  Whether riding in the stroller or in the car, she almost always dozes off for a nap because she is so comfy. I used the stroller for the first time when she was only two weeks old, taking her for a walk around the neighborhood. It has also worked great at our exercise group! The rubber bicycle like tires give it a smooth ride, and the front wheel locks to keep it from being too bumpy.

And now that Sara is getting bigger and heavier, I have begun to use the stroller without the infant seat. The back is easy to adjust to so that she can recline, and there are cup holders and a snack tray for when she is old enough to use those. There is also a handy parent's tray for me, with two cup holders, and a closable compartment big enough for my phone and keys. The handle is also wrapped in rubber so that I can get a good grip, as well as a long wrist strap that is attached to make sure that I never lose control.

It is also very easy to maneuver. The stroller's frame is really quite small compared to other brands of joggers, and it can turn on a dime, which makes it getting into and out of small spaces and narrow aisles in stores a breeze!

Baby Trend has definitely made a great everyday jogger stroller, and they even have a double version in the same color, which I will be sure to take a look at for when our next baby comes along!

This post has been updated to add sponsors by affiliate marketing programs. Thanks for supporting GuG. 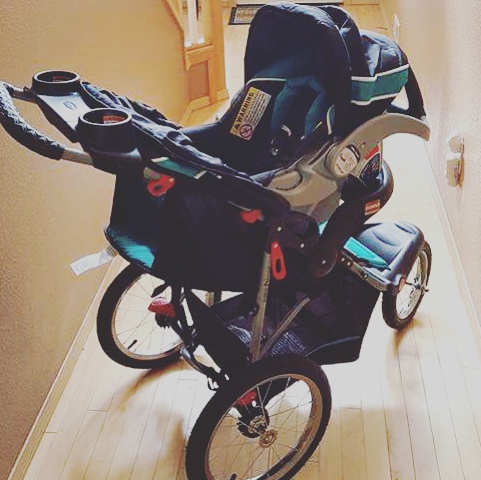 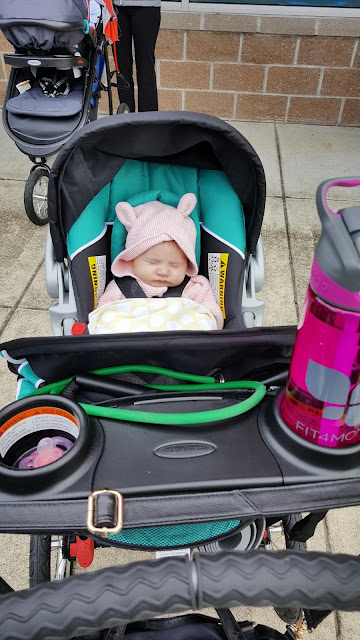 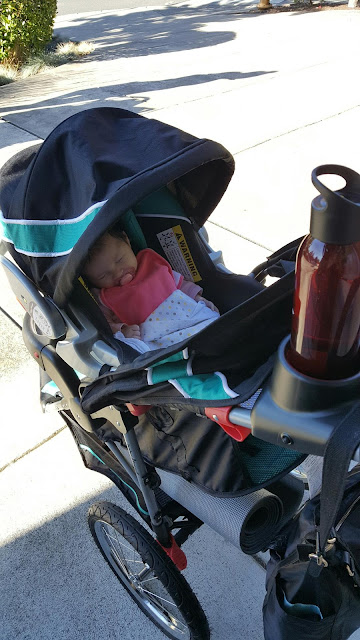 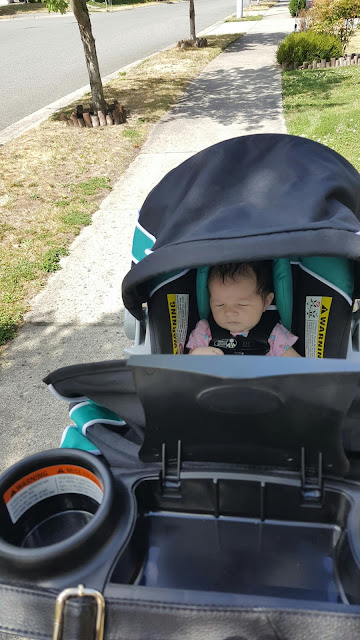 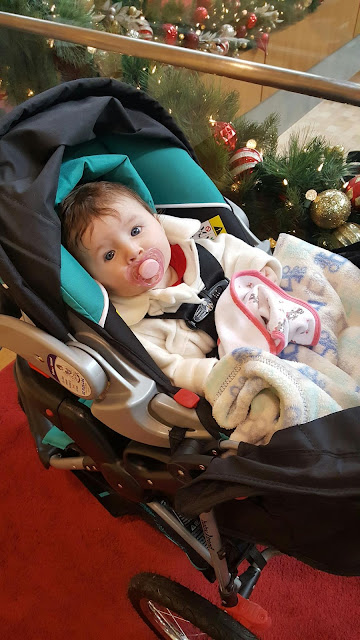 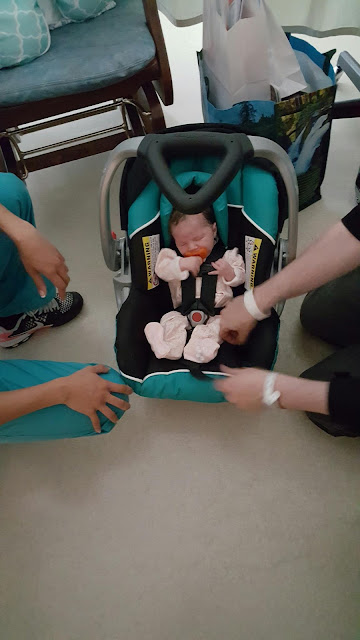 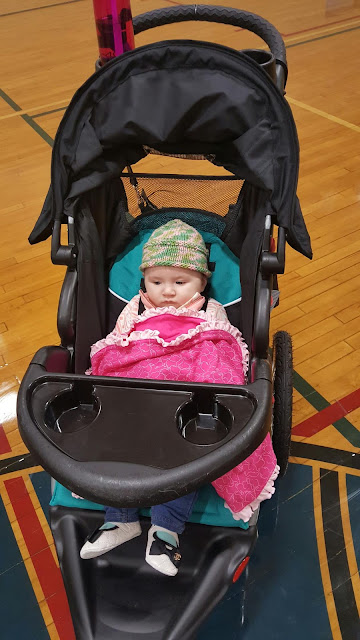 Email ThisBlogThis!Share to TwitterShare to FacebookShare to Pinterest
Labels: Gear

The End of a Journey

While I was pregnant with Sara, I had every intention of exclusively breastfeeding her, and when she was born, it was going good for the first day. But then when we realized that she had been severely injured due to her traumatic birth, and she spent the next week in the NICU. If you haven't heard the story, you can read about it here.
While in the hospital, she was fed intravenously at first, and then bottle fed formula, because I was still in a different hospital, and I was unable to continue to establish breastfeeding. I had started pumping right away, and my milk was coming in, but my supply was very low. When I was finally able to join her at the hospital, I tried to reestablish feedings, but it was very difficult under the circumstances. Besides, I was exhausted and still recovering from my c section.
Over the next few weeks, after Sara was home, we visited lactation consultants a few times, and I tried fenugreek and Mothers Milk Tea, but it never had that much of an effect on me. I found out later that my PCOS and insulin resistance can affect how your body processes fenugreek.
I did nurse Sara off and on while I also pumped, but sometimes it would take her an hour or more to feed, and at times, it was just easier to fix her a bottle of formula. I felt awful, and that I was failing her.
I eventually stopped pumping in the middle of the night, as it was just so time consuming, and I was so tired.  By the time I was finished pumping, and just cleaning my supplies, Sara would wake, and I'd have to feed her, get her back to sleep, and then it'd be time for me to pump again. I was getting no sleep. So I just started nursing Sara in the morning, and sleeping at night.
My supply has always been inadequate to feed Sara. At most, I got just 6 or 7 ounces a day, but she loved it. I could tell a difference in her when I fed her breastmilk vs formula. But at around 3 months when she was bigger and had better head control, Sara refused to stay latched. She would pull away and push her body away from me as if she was uncomfortable. I also had to use a plastic nipple shield, as she got so used to drinking from a bottle while in the hospital, she refused to nurse at all without one. These things were such a pain, and wouldn't stay in place, and also frustrated Sara, so I stopped nursing her, and just pumped.
Up until Christmas break, I was still getting about 6 oz a day, but in the last 2 weeks, my supply has plummeted. I'm now lucky if I can get 2 oz a day. On one hand, I want to stop, because being tied to a pump is inconvenient. Especially with my work schedule where I'm on the road a lot, and out in the field doing my audits. But on the other hand, I am sad, and want to keep going, because I know it's good for Sara, and she does love her now diminishing treat of breastmilk. I've tried pumping on a tighter schedule, and power pumping, but it's no use. My supply is not getting any better.
I'm really torn on the issue. I'd love to ditch the pump so that I don't have to worry about it all day, and schedule my days around it. It would also mean that I can restart my medication that controls my weight, and drink a few alcoholic drinks without concern. But I want to keep going too.
Sara has started solids, so I can take comfort in the fact that now I can make her healthy, nutritious food instead. But it's bittersweet. Either way, this journey is coming to an end sooner rather than later. I just hope things go differently when we welcome a second child.
at January 04, 2017 1 comment: