Yesterday, I took the day off from work. The Monday after Superbowl is pretty much always a slow day at work, and this year I planned to sit it out.
What I didn't expect was the large snowstorm that moved in on the Seattle area on Sunday evening. I rarely get time to watch the evening news these days, and I hadn't checked the weather forecast in days. It was a nice surprise for me! I love the snow, and I like living in an area where snowfall is common. After all, just about every year that I've lived here, we've had at least one snow day. Also, the mountains with their ski resorts and winter playgrounds are just over an hour drive from my house, so it's always easily accessible in the winter.
Sara had an appointment downtown yesterday, and afterwards, I dressed her in her little snowsuit and took her into the back yard. I built a baby sized snowman, and gave her a snowball to check out. I let her brush some snow off from a tree and the fence posts, and then she laid back on her little blanket as the falling flakes landed on her face.
After our fun outside, she napped all wrapped up in her blanket while I turned on the fireplace and made some peppermint hot chocolate. Outside, the snow was falling even more, and I sat and watched it.
I was thankful for the peaceful winter day, and that my vacation day home with Sara was even more special. 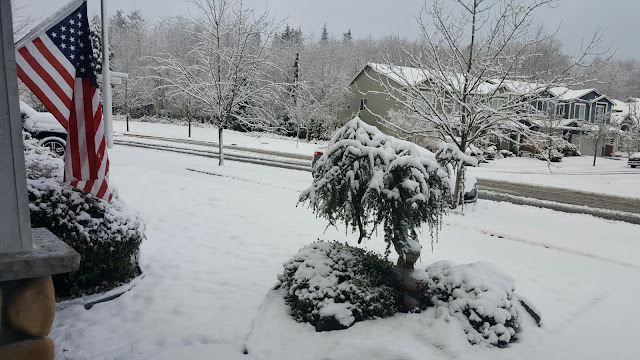 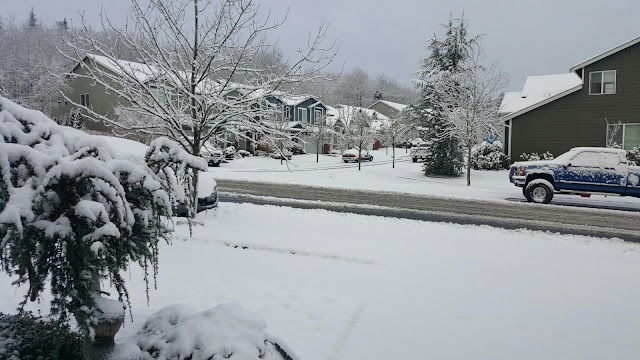 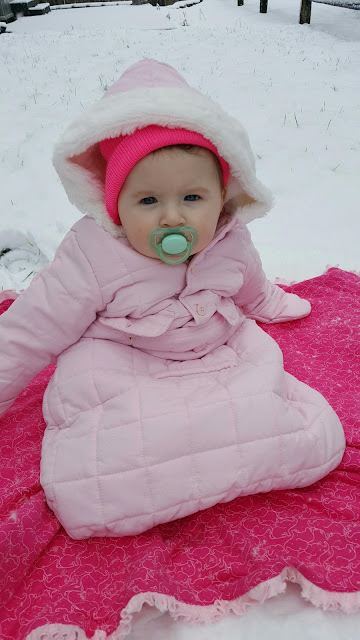 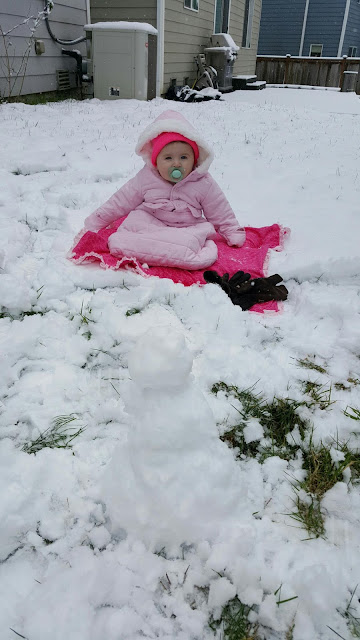 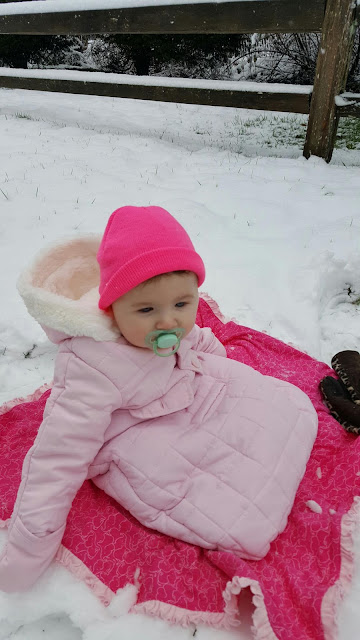 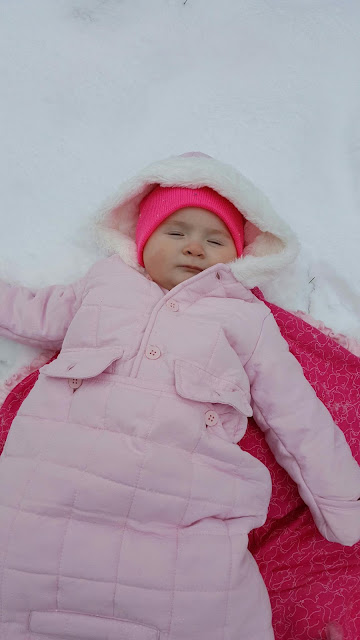 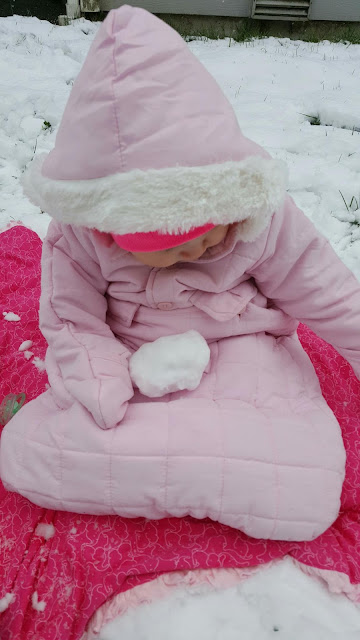 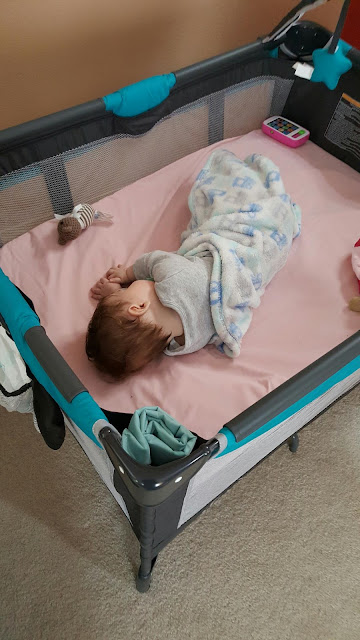 It Gets Better Right?

Lately, like since December, Sara has had a major regression when it comes to sleep. She used to sleep easily in her pack n play and then in her crib with minimal fussing. She would wake in the middle of the night a few times, and then would be happy to go back to sleep after I gave her a bottle or her pacifier.
Not anymore. Now, as soon as I put her down in her bed, she will start kicking her legs and screaming. There's no consoling her. It doesn't matter if it's her crib in her room or the pack n play in our room. We keep a futon in her room, and sometimes I'll sit on it and hold her and try to calm her down, but she knows it's bedtime, and she won't stop crying until I actually leave the room with her. If I manage to actually get her to go to sleep before hand, and lay her down, she'll only sleep from anywhere from 10 minutes to an hour or so if we're lucky before the wailing starts again.
The only place where she'll happily sleep through the night, except for a feeding usually around 3 am, is snuggled in bed between mom and dad. This is an arrangement I never wanted. For one, neither Mark nor I get much sleep, and have to lay in one position most of the night, which is really uncomfortable. Also, having her in bed with us hinders other things if you can imagine! It has caused tension and some arguments between us.
Back in the early days, which were just a few months ago, we would occasionally put her in bed with us, because she would get really gassy sometimes, and be unusually fussy. But she would still go in her own bed and sleep on her own a few hours later. Not anymore. It seems as some switch was turned on, and now she outright refuses to sleep by herself. It is really frustrating to me, and has me Googling sleep consultants. I feel like I'm more sleep deprived and stressed now than I was in her newborn weeks.
The other week, Mark was extremely ill, and I feared that it was the flu or norovirus. He was bedridden for a few days, which stressed me even more. I work full time, and also during that time was pretty much her sole caretaker. I also didn't want to put Sara in bed next to him out of fear that she would catch whatever he had. So, late in the night, as I sat on the futon, holding her while she screamed her head off, after a long day of work where I logged almost 200 miles out in the field doing my audits, I had a breakdown. I called my own parents crying, and I was considering just sitting Sara in her pack n play, and then driving to a hotel, and checking in for a few days for some piece and quiet. I didn't do it, but I sure wanted to.
Mark ended up getting up to give me a hand, and ultimately, Sara did end up in bed with us, and luckily didn't end up sick. But I hope this phase goes away soon. I never wanted to do the cry it out sleep training method, but I fear that it's coming. Soon. Every day, though, I remind myself that one day she'll be a teenager, and I'll have to constantly nag her to get out of bed before noon!
at February 01, 2017 2 comments: