Going to the race track has always been a favorite activity of ours. We go to watch the horses and make a few bets several times a season. Some of the best days to go to Emerald Downs is on Triple Crown race days. Everyone dresses up in traditional race attire: spring dresses for the ladies, and pastel sport jackets for the men. And of course, the hats! The bigger, crazier, and more creative, the better! It's so much fun, and you can place bets on the actual big races, which are simulcast on screens all over the facility so you won't miss a moment of the action!
This year, we chose Kentucky Derby day to take Sara to her first race. I dressed her in a cute little dress with a matching headband, which she quickly pulled off from her head, and away we went! 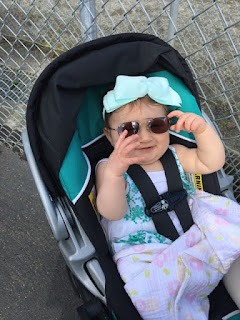 Sara loves people watching, and she loves animals! She was definitely enjoying kicking back in her stroller and watching everyone around her. Many people even came up to her to say hello! The race track is a very family friendly event, and there were tons of kids around, and Sara enjoyed watching them laugh and play and run around. I can't wait until she's big enough to join them!
In the early afternoon, before the Derby, the first of the live races took place. We took Sara to where they lead the horses in from the stables, so that she could get a close up view of them. She didn't notice at first, but when they started leading them around the paddock, she saw them, and couldn't keep her eyes off them! 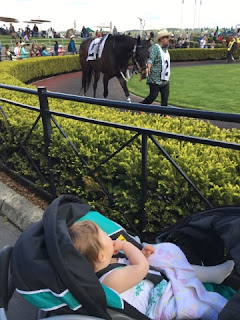 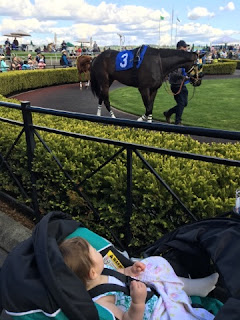 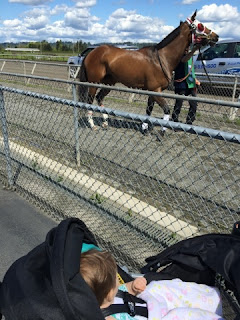 As they continued to lead the horses around the ring, and then onto the track, Sara couldn't get enough! She smiled as they walked by, just a few feet from her. When it was time for the race, we took her down to the rail alongside of the track so that she would have a good view when the horses crossed the finish line.
As the horses came thundering down the track, Sara turned towards them, probably wondering, "what was that?" She watched as they crossed the line, and then led them back to the stables. 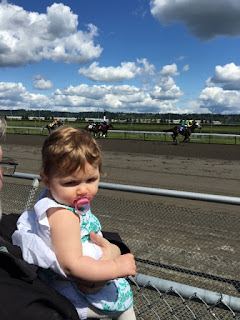 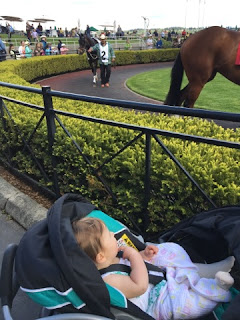 After the first race, I left to get mint juleps for Mark and I, while he and Sara watched a few more races. At one point, a lady came up to Sara and asked her which horse she liked for the next race. Mark told her, "She likes number 6!" And the 6 horse actually won the next race! 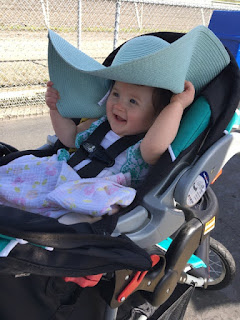 When it came time for the Derby, we found a seat, and watched the broadcast from the main screen above the track. Unfortunately, none of the horses I bet on won. We stayed for one more live race, and then set off for home, because Sara was starting to get sleepy.
It was a fun day, and the first of what hopefully will be many fun trips to the races!

Pool Time A No Go

So, today was the first really warm day we had, so I decided to set up my inflatable pool in the front yard for a dip. I bought it last year, but because I was pregnant, I never got around to using it.  So this afternoon, after returning from the store with a brand new pair of swim diapers for Sara, I got it all ready.
First, the diaper, which is like a cloth diaper, but for water use, was almost too small for her. I'll have to go back later and get the next size up. Next, I went to put her swimsuit on, which is a 6-12 month size, and of course, it was too small. Luckily, I had bought a second suit, 12-18 month, and it fit her just right. Guess I'll be going back to Janie and Jack before vacation to get her a few more suits, because they have the most adorable baby swimwear!
I took all of Sara's favorite bath toys and put them in the pool, then I got in myself, and it was absolutely freezing! I didn't know how Sara would take it, but I dipped her feet in, and of course she screamed her head off.
I went inside and filled up several buckets of hot water to put in the pool. That made the temperature a lot more tolerable, so we tried again. Nope! I no more than dipped her toes in, and it was hysterics. I threw in the towel-not literally-after that. I changed Sara back into her outfit, and then I went to enjoy my pool myself for a bit before I had to empty it. Oh well...
I guess I'll be waiting for warmer temps before trying again. I'll also have to get a smaller kiddie pool, as mine proved to be just a bit too big, and a bit of a hassle. Hopefully though, Sara will come to love the water and swimming as much as her mom does!
at May 21, 2017 No comments: 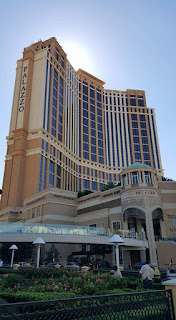 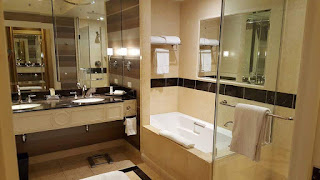 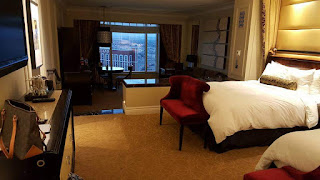 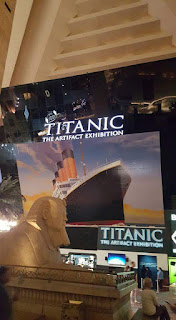 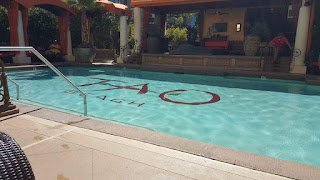 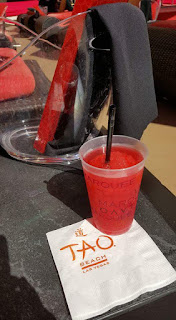 No stay at a Vegas hotel would be complete without a visit to the spa. I love going to spas, and Canyon Ranch at the Venetian was one of the best I've been to so far. I got a 90 minute massage with a brown sugar scrub, and the package came with access to the entire facility. This included private sauna, hot tub, relaxation room, and pool access. A pretty good value for the price!
When Mark and I did have time together, we made the most of it. We took a gondola ride along the grand canal, played some games in the casino, perused the high end shops, and ate a meal at one of the many fine dining restaurants. We also took in a live show, Rock of Ages, which was amazing! I love the movie, and have always wanted to see it on stage! I loved the songs, and the energy of the show, and everyone in the audience was singing along by the end! Afterward, we went to the after party at the Bourbon Room bar for more music and complimentary shots.
We also got to attend a private party together. One put on by the tech conference he was attending called Rewind. This was a huge outdoor party in the parking lot of the Linq. There were probably more than a thousand people attending, and it included a live concert, games, food, bars, and everything you could expect from a private party thrown in Vegas! Unfortunately, I wore heels, and was spending most of the night trying to stay off my sore feet as much as possible, but I had so much fun!
Our last night there, I drug Mark to my last Vegas bucket list item, experience a Vegas nightclub. We went to the one in our hotel, Tao. It was like no other party I've ever been to before! Great music, tons of people, and everyone dressed to the nines! They had cages suspended from the ceiling behind the bars, and a giant bathtubs that girls could dance in, although I didn't do this. I enjoyed the main floor in front of the DJ, which by the end of the night, was so crowded, you couldn't move. It was a blast, and I felt like I was in college again! I'm also grateful  Mark agreed to come, because he's not a club person, but I think he enjoyed watching the whole spectacle.
Overall, it was a great trip, and Vegas is so exciting! There's so much to see and do, that it can be overwhelming your very first time. I'm definitely thinking it's time for another trip, this time as a completely leisure get away for both of us! We'll have to see what we can get into!
at May 09, 2017 5 comments: