Wow, it's already been a week since Independence Day! I've been really busy, and haven't had a lot of time to devote to my blog.
Last Tuesday was the 4th of July, one of my favorite holidays! I love cooking out, going for a swim, and of course, fireworks! Our subdivision is located outside of city limits, so we are allowed to shoot them off, and boy can our neighborhood put on quite a show! I'd say we rival even the professional shows! With a reservation nearby, and countless road side pop ups, fireworks of all caliber are easy to come by.
This year, I was a little nervous about how Sara would take it all in. Earlier in the day, I took her swimming at Silver Lake, and some people in nearby houses were shooting off mortars, and she didn't seem to mind, so I had my fingers crossed.
That evening, we had our cookout, and then got everything ready. Mark had also gotten her a set of baby sized noise cancelling headphones just in case. Many of our neighbors were already partying, and rockets were lighting up the sky for as far as you could see.
I decided to start off with some Roman candles before moving on to the bigger stuff. The first one, a small one, didn't phase her at all. She seemed really into it. The second one, however, was quite loud, and had an ear splitting pop whenever it went off. Sara had had enough. She started screaming, and wouldn't calm down. Mark had to take her inside to calm her. 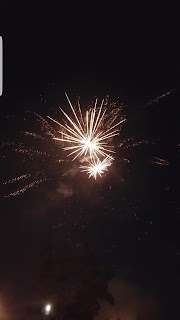 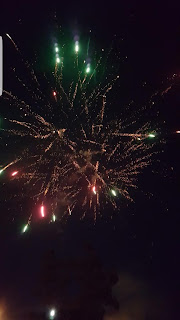 When she settled, he put the headphones on her and brought her out onto the front porch. By this time, it was darker outside, and the neighborhood party was in full swing. As soon as she heard the constant booms from all directions, she went into a fit of hysterics. She was done! She ended up happily watching Mommy shoot off fireworks through the window in the safety of our living room!
I guess next year, since she will have a bit more communication skills, I'll explain everything to her leading up to the night, and show her videos of fireworks on YouTube. Maybe she'll be more into it then! 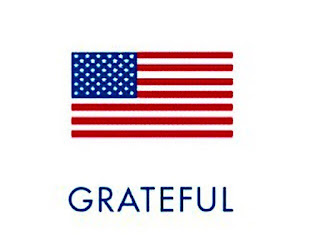